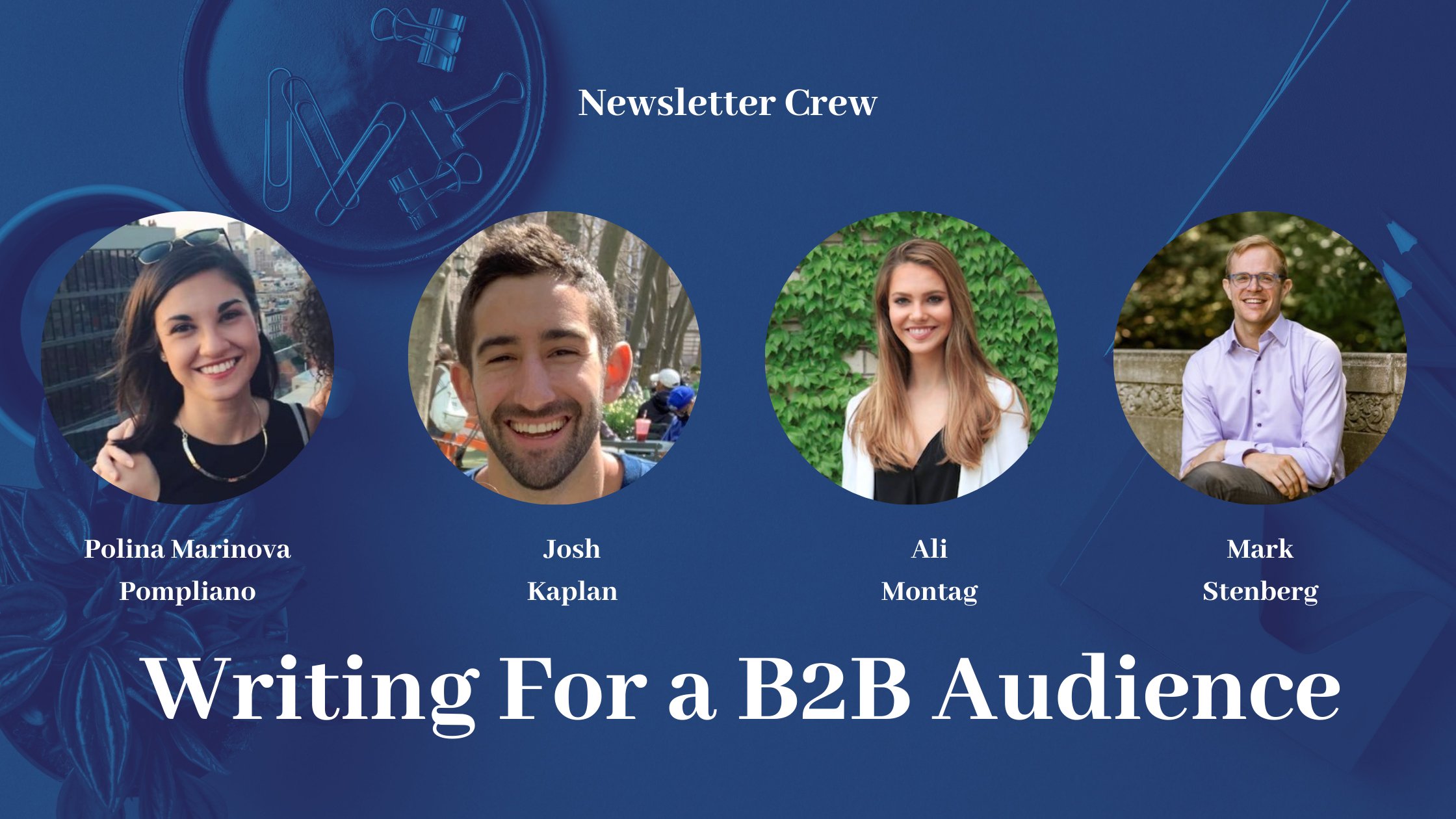 In last week’s panel on B2B media, I asked three experts for their advice on growing a newsletter. I spoke with Mark Stenberg, a media reporter for AdWeek and author of the newsletter Medialyte, Josh Kaplan, who previously helped scale Morning Brew and works with creators like Kinsey Grant and Colin & Samir to develop their brands, and Polina Marinova Pompliano, who writes the wildly popular newsletter The Profile.

Here is their top advice for newsletter writers. ‍

When you’re trying to drive subscriptions, how do you get somebody to pay for something? You write a must-read story that has incredibly valuable information, or you write a story that has never been told. How you go about being original is certainly challenging. That’s something everybody is trying to figure out.

It’s a balance between, “I want to be informed by my peer group” and “I also want to be a little bit insulated, so that I'm not just saying what they're already thinking.” Originality, in whatever form or fashion you can create it, always seems like step number one.

‍You have to focus on building trust with your reader by writing consistently, even when it feels like you’re speaking into the void. I interviewed James Clear earlier this year. He grew to one million subscribers, and even he was saying how in the beginning he literally felt like he was speaking to no one because he started from zero.

But it’s not a thing until it's a thing. The Profile was not a thing until it was a thing; until people were like, “Oh yeah, The Profile.” That happened over time, consistently writing Sunday after Sunday after Sunday. After I had been doing it for three years, transitioning to a paid newsletter didn’t come as a shock to people. People knew that I would be there and that I wouldn’t just run off with their money.

In the early days, when you don’t have anybody reading, try to borrow other people’s audiences. You can interview interesting people like James Clear—someone with a big audience—who will then promote your writing to their own audience. Or, you can do guest posts. Writing guest posts are a really great way to get in front of other people’s audiences.

‍The time to monetize is always now. Don’t put off monetization, even if it is just selling a hat. It’s a great way to understand what people like and what they are willing to pay for. People love to show their fandom with money. Make sure you’re giving them the opportunity to do so.

My second piece of advice is to be accessible. I’ve met a lot of very, very smart creators who are deep in their respective fields. I think it’s easy to fall into a trap of needing to be too smart. There’s a way of communicating that is accessible and allows anyone to join the party. Then you can get deeper on the paid side. Saying, “Hey, we’re happy to have anybody,” is a good mentality when writing and marketing.

Third, make sure you have a clear way to introduce your idea and repeat who you are. When somebody says, “Ali is my favorite writer,” and somebody else says, “Who is that?” you want your readers to go, “Oh. I’ve read her introduction a million times. I know exactly how to describe her to you.”

Repetition and accessibility are extremely important.

You can watch the full panel here.